Opéra Garnier, Palais Garnier, Opéra de Paris or simply the Opéra. This pinnacle of Paris’ architectural treasures is known by many names. But however you wish to refer to the neo-baroque building, its ceaseless offerings of culture, opulence and mystery endure! The latter no doubt helped along by Gaston Leroux’s fabled Phantom of the Opera, former terroriser - and subsequent immortaliser - of the Palais Garnier (within the pages of his 1910 novel, at least). All that remains is for you to discover this Paris institution for yourself, which, is conveniently located just a scenic ten-minute stroll from Amarante Beau Manoir.

Probably the Most Famous Opera House in the World…

Which (confusingly) isn’t home to the opera, with the Opéra national de Paris based across town in the uber-modern Opéra Bastille. Instead, Palais Garnier is the place of residence for the Paris Ballet, although culture lovers are occasionally treated to classic compositions, should you want to catch a performance in the capital’s original home of opera!

However, it is the building itself - and the mystery surrounding it - which has given rise to Palais Garnier’s standing as one of the most famous opera houses in the world. Brainchild of Charles Garnier, the architect would lend more than just a name to the theatre, instilling his love of lavishness into his designs. Embodied nowhere more so than in the sweeping Grand Staircase, the gilded auditorium (complete with red velvet seats) and the infamously exorbitant chandelier - with the ceiling from which it hangs only adding to the extravagance after receiving a facelift, courtesy of avant-garde artist Marc Chagall, in 1964.

Such was the exuberance of Charles Garnier’s design, his magnum opus would take fifteen long years to complete, finally opening its doors to the public in 1875! However, 1910 would be the year when Opéra Garnier propelled into the global mainstream, following the release of Gaston Leroux’s novel chronicling the misadventures caused by a certain phantom. Taking inspiration from dubious mysteries surrounding the building - namely the real-life underground lake, which provided a fitting lair for the novel’s antagonist - The Phantom of the Opera and its subsequent spin-offs (you’re no doubt familiar with Andrew Lloyd Webber’s abiding musical) have given life to Palais Garnier beyond its cultural presentations. So regardless of whether you’re taking in a performance by the Paris Ballet, Opéra national de Paris, or simply looking to savour the splendour of the building, no end of discovery awaits within this iconic institution.

Of course, the utmost way to experience Palais Garnier is by taking in a ballet, opera or classical music recital, which, fortunately for you there are no shortage of, given the auditorium’s housing of an ever-changing calendar of productions, spanning the classic repertoire through to cutting-edge contemporary performances. Doing so will require some planning on your behalf however, with tickets to a recital among the hottest in town, so be sure to reserve your space as soon as humanly possible! Alternatively, try your luck last-minute at the box office, with tickets typically costing between €10 and €250.

But that’s not to say you have to take in a performance. Another excellent way of discovering Palais Garnier is to depart upon a guided or unguided tour, familiarising you with features like the Grand Staircase and auditorium as you discern the building’s history, whilst acquiring a taste of aristocratic life during the Second Empire. Opting for a guided tour will also allow you discover some of the Opéra’s secret spaces, including the Foyer de la Danse - former salon and source of inspiration for many painters and writers, including Honoré de Balzac and Edgar Degas!

Admirers of the influential French artist can also discover some of his famous dancers within a small ballet museum, where they are joined by artefacts like the tutu worn by prima ballerina Anna Pavlova during her epic Dying Swan in 1905. Then, to complete the experience, delight in some exquisite fine-dining at L'Opéra Restaurant - Palais Garnier’s contemporary on-site eatery - courtesy of culinary maestro, Stéphane Bidi. 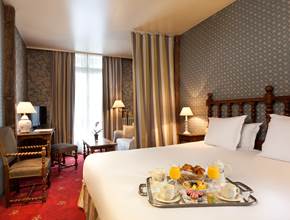